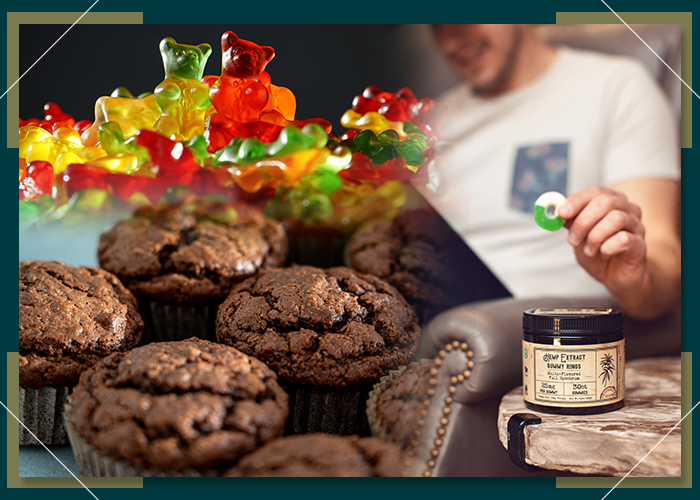 Throughout history, the act of smoking has held great significance for cannabis more than any other method of consumption. As mentioned in What is the Best Way to Use a CBD Flower? the smoking of cannabis has become a social and religious ritual in many cultures for the purposes of building relationships, healing, and spiritual enlightenment. This raises the question: why have edibles become so popular.

One of the main factors why smoking is so popular is that it allows cannabis to have a faster effect. It also has the highest bioavailability of all methods of marijuana consumption. Only direct injection into the bloodstream has higher bioavailability, but this is very uncommon.

Building on the popularity of smoking, vaping has also taken off after its invention in the last decade or so. Vaping promised a safer and more “modern” way of smoking. This helped remove the stigma attached to cannabis and even made it look cool. Vapes also became more mainstream since they are allowed in more places than a cigarette or joint would.

Compared to smoking or vaping, ingesting cannabis or CBD by eating and drinking seems too deliberate and somewhat inferior. After all, why eat or drink it when you can just vape it, or even take it sublingually?

Cannabis as food in history

The reason for this could be that humans also have a history of eating cannabis. According to documented history, ancient Hindus in the Indian subcontinent have been putting cannabis into food and drink for spiritual and medicinal purposes as early as 1000 BCE.1. It was even well-known to them that cannabis extract is oil-soluble so it was instructed in Sanskrit recipes that cannabis be sauteed first in ghee (a kind of clarified butter) before mixing with other ingredients.

Another likely reason is that edibles are more discreet. It is easier to disguise cannabis as food than lighting up a joint or sucking on a vape pen.

The inherent curiosity and interest of the culinary world in using new and exotic ingredients can be another reason. With the rapid growth of the cannabis industry and the US government seemingly moving in the direction of making weed legal, cannabis is predicted to become the hot new ingredient in the next few years.2 CBD-infused food is a good gateway for those who are curious to try but are afraid to be associated with the stigma of cannabis.

Lastly, cannabis edibles are known to cause a different kind of “high” compared to that of vaping.

Why should you take CBD edibles?

Thankfully enough, CBD edibles are not as complicated as cannabis edibles that are typically THC-dominant. It is fairly well-known that marijuana edibles can give users a “bad trip” when prepared and consumed incorrectly. This is because it can be tricky to get the dosage right when preparing edibles. Since the effect of edibles can take a while to show, it’s also easy to overshoot one’s consumption, which can lead to overdosing. Also, cannabinoids in edibles have to be processed by the liver and this includes Tetrahydrocannabinol (THC), which turns into 11-hydroxy-THC. There’s not a lot of research on the effects of this cannabinoid, but what we know is that it can cross the blood-brain barrier faster, giving the user a more intense “high”.3

Fortunately, this is not an issue with when consuming CBD edibles since CBD does not have the psychoactive effect of THC. However, like regular cannabis edibles, it does take a while before you can feel the effects of a CBD edible.4 Usually it takes one to two hours to achieve peak levels in the bloodstream, but it also tapers off more slowly compared to vaping.

The disadvantages of CBD-infused food

One particular disadvantage of edibles is that CBD can disrupt the activity of liver enzymes. Specifically, it affects the cytochrome P450 system, as discussed in What Drugs Shouldn’t You Take with CBD? These enzymes are used by the body to metabolize around 60% of all prescription drugs, so you might want to reconsider having a CBD edible if you are currently taking medication, or check if your medication has a grapefruit warning on its label. Grapefruit, as well as St. John’s wort and watercress, can also disrupt the activities of the CYP450 system. To be safe, it is best to consult with a doctor on this matter.

It is also quite tricky to get the dose correctly when making your own edibles. The effect of the CBD in your recipe will depend on two factors:

It’s a good thing that it isn’t possible to get a “bad trip” from overdosing on CBD. However, getting the correct dose means using less CBD, which is more economical. Also, CBD is biphasic, which means it can have an opposite effect at a higher or lower dose.

The hassle of getting the right dose is usually not a problem with most ready-to-eat CBD snacks. These food products will have exact information on its CBD dosage, nutritional information, and effects on their labels. For example, one snack that is almost synonymous with CBD are gummies. A popular brand is Sunday Scaries CBD Gummies with vitamins which clearly indicates on its label how much CBD is in every serving. Another product that puts together nutrition, taste, and CBD in a convenient package are bars. JustCBD’s Protein bars contain a good amount of protein from the nuts and soy protein in a variety of tempting flavors like Cookies and Cream to make CBD enjoyable. This seems to be an ideal post-workout “reward” snack especially since CBD also has muscle-relaxing and pain-relieving properties.

While adding CBD on practically any kind of food can seem like a gimmick, it is just similar to food fortification, which is not a new idea. Here are ten other kinds of CBD edibles that you need to know about:

These kinds of snacks are just the tip of the iceberg. A number of restaurants such as the James New York NoMad6 has begun offering CBD dishes as early as 2018-2019, which shows that the cannabis culinary trend is gaining momentum despite current legal issues and it is likely to explode once the government gives CBD the green light.

It is quite known that edibles are not the most efficient and cost-effective way of ingesting cannabinoids. However, it does have a place in the whole range of CBD products. Not everybody would be willing to smoke or vape while sublingual drops are not that enjoyable. Clearly, edibles offer an easy and convenient way of enjoying CBD without the risks and unpleasantness.

2 thoughts on “Why Use CBD Edibles Instead of Vapes”