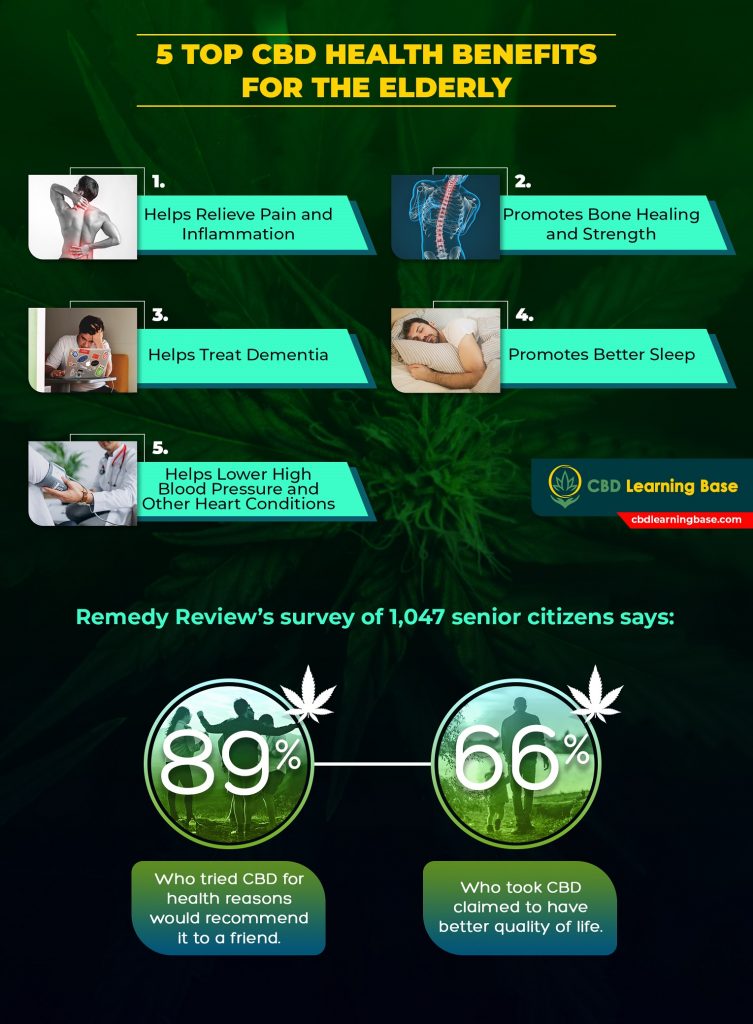 It is unavoidable for people in their 50’s to face an increasing number of health challenges as they age. At present, contemporary medicine is inclined to prescribe medication for every single condition that a patient might have and because of this, most elderly people end up having to take an expensive cocktail of “maintenance meds” with each drug having its own side effect and interaction with other drugs. Unfortunately, this drug combo often results in dependency, further health complications, and increased mortality1 as we’ve mentioned in Drugs to Avoid While Using CBD. This is why it is important to raise awareness on CBD for the elderly.

On the other hand, CBD or cannabidiol holds promise for a “natural” course of treatment that seems to address a whole range of conditions, including those typically associated with aging such as arthritis, sleep disorders, and neurodegenerative disorders. This, coupled with the lack of information on its drawbacks or side effects, makes CBD a very attractive option for seniors who are often quite eager to try anything that will give them relief from their ailments, even if it is just based on a friend’s recommendation.

In fact, in a survey of 1047 senior citizens by Remedy Review, as high as 89% of the 9% who tried taking CBD for health reasons said they would recommend it to a friend. Additionally, 65.6% of those who took CBD said that their quality of life had significantly improved after, coming from 31.1% previously.

In the same survey, 42% said they used CBD for inflammation problems while 40.9% used it for chronic pain, which isn’t surprising since medical marijuana and THC have long been used to manage pain. With CBD however, the elderly have the option to treat their pain while addressing a whole slew of other conditions in a holistic and possibly more economical way, since they won’t need to multiple medications, all without the risks associated with cannabis intoxication. An example of a holistic form of pain treatment suitable for elders would be a CBD massage.

Most notably, CBD is increasingly being used to alleviate the crippling pain caused by arthritis, which is prevalent in the elderly. However, evidence of CBD’s pain-relieving properties has only been proven so far in a study2 involving rats and not humans. Nevertheless, a growing number of users swear that CBD is more effective than medication like Tylenol while being significantly less risky than opiates.3

Aside from pain management, here are 9 other popular health benefits which the elderly can get from taking CBD.

Possibly one of the CBD’s biggest potential is that it can be used to treat a number of conditions related to dementia, namely Alzheimer’s, Parkinson’s, and Huntington’s disease.4 In particular, studies have shown that CBD can reduce inflammation in the brain which also causes oxygen stress that impairs brain functions. It also acts as a stimulant that promotes brain cell growth and regeneration.5

Fractures due to declining bone strength in senior citizens is another benefit of CBD for the elderly. In a 2015 study, researchers from Tel Aviv University and Hebrew University found that CBD helped heal bone fractures faster in an experiment using rats.6 According to Dr. Yankel Gabet who led the research team, CBD enhances the maturation of the collagenous matrix where the new bone tissue is built, and the bone even becomes stronger after the CBD treatment.

According to survey findings7, around 50% of older adults report some kind of sleeping problem like earlier waking times, frequent nighttime awakenings, difficulty in going back to sleep and decreased quality of sleep.8 CBD also has a huge potential in treating such disorders, thanks to studies involving human subjects which yielded results that seem to support numerous anecdotal evidence. In a recent study9, as high as 66.7% of 72 test subjects reported getting better sleep after taking a dose of 25mg CBD in capsule form per day.

5. CBD Can Help with Anxiety and Depression

The decline in health that comes with age can make older people more vulnerable to mental issues. Additionally, stressors such as loneliness, the death of a loved one, and elder abuse can result in profound psychological consequences such as anxiety and depression.

There is at least one study10 that supports numerous anecdotal claims to CBD’s effectivity as an antidepressant, noting that it exhibited a positive interaction with the brain’s serotonin receptors. In one study involving human male subjects, it was found that a 300mg dose of CBD was the most effective in reducing anxiety during a public speaking test.11

6. CBD Can Help with Heart Conditions

CBD also showed a lot of promise in treating cardiovascular diseases such as high blood pressure, as evidenced by studies on mice and humans. In the study involving 9 male subjects, it was found that a single 600mg dose of CBD oil reduced resting blood pressure and even a smaller blood pressure increase during stress tests.12 Meanwhile, a study on mice with heart disease showed that CBD can reduce inflammation, fibrosis and cell death.13

Dependency and addiction to prescription drugs among the elderly is a growing problem in the US and it affects up to 17% of adults over 60 according to the National Institute on Alcohol Abuse and Alcoholism (NIAAA). Worse yet, this problem is often overlooked since the symptoms are very similar to those of diabetes, depression or dementia.

Thankfully, there are already several studies that establish CBD’s effectivity in mitigating the harmful effects of addictive medication and preventing relapse. A study on rats showed that a daily dose of CBD for just 7 days can help prevent relapse as long as 5 months after.14

Muscle stiffness is common among the elderly and is brought about by a number of things like muscle disuse, stiffening of arteries and various age-related conditions. It is already well-known that CBD has analgesic properties and can aid in muscle relaxation. In addition to this, a 2018 study showed its effectiveness in reducing muscle spasticity in people afflicted by multiple sclerosis.15

9. CBD May Help with Diabetes

Although still largely unclear due to lack of studies, CBD may hold hope for those with diabetes, a condition common among older people. One study showed that CBD may lower the chance of getting diabetes16 while showed that it can reduce pancreatic inflammation in Type 1 diabetics.17

Additionally, it may also be found in future studies that CBD may also enhance THCV’s effectiveness in controlling blood sugar levels in Type 2 diabetics.18

10. CBD May Help with Incontinence

Another common condition suffered mostly by the elderly, incontinence is the lack of control over urination or defecation. At present, there is at least one study that establishes the effectivity of CBD, albeit in combination with THC, in treating bladder issues of multiple sclerosis patients.19

While CBD is already being used to address a wide range of common elderly health problems, it is still important to note that claims of its benefits mostly come from anecdotal sources and there are not a lot of clinical trials involving humans that support them.

Also, since CBD is currently in a legal gray area in the United States, it can be difficult to verify the quality of CBD products in the market. Inferior, illegally sourced, or counterfeited products are likely to contain impurities, solvents, and other compounds that could be harmful to the user which is why extra caution is needed when buying and using cannabidiol products.