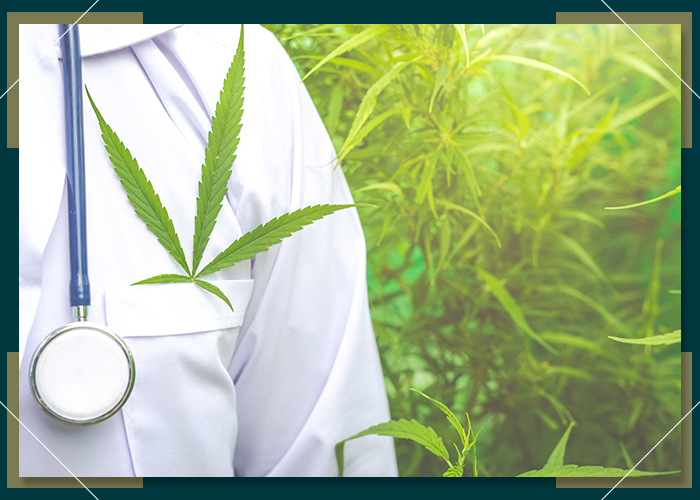 As we’ve mentioned in How to Grow and Cultivate Your Own Hemp Plant for Smokable CBD, various cultures throughout history have long recognized the healing properties of cannabis or marijuana. It was as early as 400 AD1 that this contentious plant was already being used as medicine. Unfortunately, the plant is known more as a recreational drug. This has given cannabis, cannabinoid alternatives, and its products a stigma that is preventing society from properly understanding and adopting it.

Cannabis is particularly prized for its naturally occurring compounds called cannabinoids. At present, there are around 113 different cannabinoids2 that have been isolated from cannabis. Arguably, THC (Tetrahydrocannabinol) has become the most well-known because of its psychoactive properties. However, studies3 on a number of these cannabinoid alternatives have already proven it is possible to enjoy their benefits on health conditions such as pain, anxiety, sleep problems, epilepsy, etc. with little to no psychoactive effects typically associated with cannabis use.

This is perhaps the biggest draw of CBD or cannabidiol, a cannabinoid that has surged in popularity in the last few years. Because it does not give the user the same “high” as THC4, CBD is not as tightly regulated. This has led companies to market CBD as a sort of cure-all and incorporate it in all sorts of products, from oils, pills, food, and even beauty products.

The CBD market is now exploding in the US. From a market size of around $600 million to $2 billion in 2018, it is expected to grow to $16 billion by 20255. However, this kind of meteoric growth is also saturating the market with CBD products, making it difficult for companies and their products to stand out. Analysts say that this is one of the reasons why some brands are looking to market lesser-known cannabinoids.

While it has been shown that CBD addresses a wide range of ailments from acne to depression and even PTSD6, the truth is that studies and awareness on cannabinoids are just picking up due to developments on legislation and regulation surrounding cannabis. At present, scientists are just beginning to discover properties unique to minor cannabinoid alternatives which may be more effective than CBD in addressing certain kinds of conditions.

As the cannabis products industry matures, the market is likely to see bespoke products that use cannabinoids other than CBD to target particular health problems.

Below are 6 other cannabinoid alternatives that are likely to draw attention away from CBD this year. 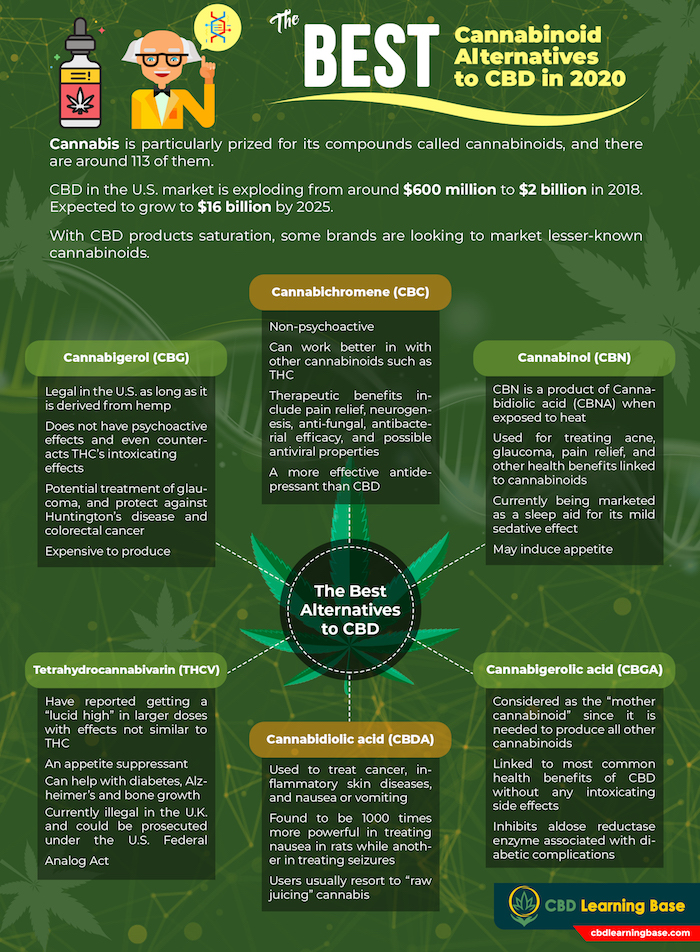 Discovered in the 1960’s, CBG is a relatively scarce compound7 that is the precursor of other cannabinoids such as THC and CBD.

Like CBD, it is legal in the US as long as it is derived from hemp. It also does not have any psychoactive effects and in fact, even counteracts THC’s intoxicating effects8.

It also shows potential as an alternative, non-intoxicating alternative to THC for the treatment of glaucoma, an eye condition that cannot be treated solely with CBD.

Unfortunately, CBG is costly to produce which is why it is largely unstudied and any potentially harmful effects left undiscovered. Moreover, there has yet to be any clinical research to see its specific effects on humans 11.

CBC, which is produced from decarboxylated12 CBCA is another cannabinoid that is not as abundant in cannabis. Since it does not activate any of the endocannabinoid receptors in the body, it is generally considered to work better in combination with other cannabinoids such as THC in an “entourage effect”13. CBC is not psychoactive like CBD and also has a host of therapeutic benefits associated with cannabis use such as pain relief, neurogenesis, anti-fungal, and antibacterial efficacy.

A study in 2010 also suggested that CBC was a more effective antidepressant than CBD[note]El-Alfy AT1, Ivey K, Robinson K, Ahmed S, Radwan M, Slade D, Khan I, ElSohly M, Ross S.Antidepressant-like effect of delta9-tetrahydrocannabinol and other cannabinoids isolated from Cannabis sativa L.[PubMed][/note] It is even rumored to have antiviral properties, but this has yet to be confirmed by studies. However, like other lesser-known cannabinoids, there are not a lot of studies on CBC so any harmful effects have yet to be discovered.

Often abundant in older cannabis plants, CBN is the product of Cannabidiolic acid (CBNA) when it is heated up. CBN is said to be effective in treating acne, glaucoma, pain relief, in addition to other health benefits linked to cannabinoids.

Most users agree that CBN has a mild sedative effect which is why it is currently being sold as a sleeping aid. A study on rats14 also showed that it can induce appetite, unlike CBD.

Arguably, there will always be a market that will be drawn to cannabis because of its psychoactive properties. Unlike CBD, users have reported getting a “lucid high” on THCV in larger doses with effects not similar to those of THC15.

It is also an appetite suppressant and is even said to help with diabetes, Alzheimer’s and bone growth16which are benefits not commonly linked with CBD.

One major drawback of THCV is that it is currently illegal in the UK and can also be prosecuted under the Federal Analog Act in the US.

CBDA, the precursor of CBD, is similarly used to treat cancer17, inflammatory skin diseases18, and nausea or vomiting19. One study found CBDA to be a “thousand times” more powerful in treating nausea in rats. Another study suggested that it could be a promising course of treatment for seizures20.

CBDA gave birth to the “raw juicing” movement of cannabis since it is an unstable compound that decarboxylizes to CBD even at room temperature.

As the precursor of CBG, CBGA is essential to the production of other cannabinoids which is why it is considered by scientists to be the “mother cannabinoid”. It also possesses the most common health benefits of CBD without any intoxicating side effects. One notable benefit that sets it apart is its effectivity in inhibiting the activity of an enzyme called aldose reductase which is associated with diabetic complications21.

The harmful effects of CBGA are largely unknown since there are very few studies on it despite its discovery almost 50 years ago.

The boom of CBD is likely to fuel more research and studies into cannabinoid alternatives found in cannabis. These are likely to have just as much medicinal value as CBD and THC which means they can be sold as their own product. However, it is advisable to use cannabinoid alternatives and derivative products with heightened caution until studies can officially confirm their effects. While cannabinoids are generally safe, there’s a chance that they can cause a harmful effect when combined with medication.