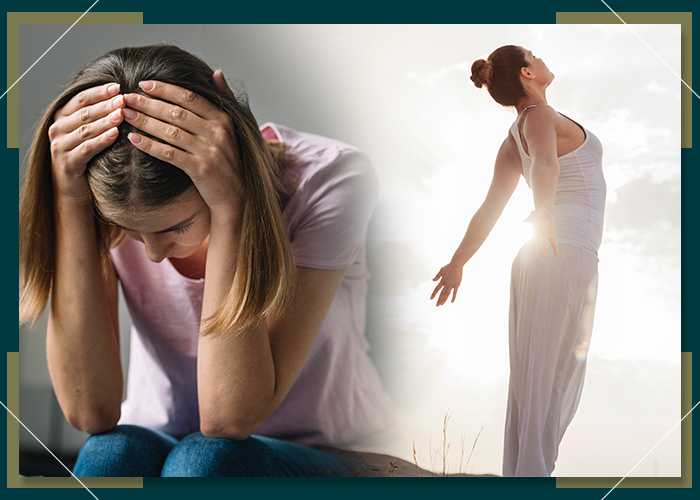 According to the WHO, depression is a common health condition suffered by as many as 264 million1 people around the world. It is a truly devastating illness that is one of the leading causes of disability worldwide. The WHO estimates that depression leads around 800,000 people to suicide each year, with young people aged 15 to 29 comprising the majority of this group. Because of this, the interest in CBD for depression and PTSD has increased in the last few years.

There are a number of social, psychological and biological factors that contribute to depression, but it can effectively be treated not just by psychological therapy but also with medication. However, it is well-known that the side effects of antidepressants, which include diminished sexual interest, insomnia, headaches, joint and muscle pain2, etc. also significantly decrease the quality of life those that take them. Worse yet, users can build a tolerance to these medications and suffer much worse withdrawal reactions that include dizziness, fatigue, and blurred vision, to mention a few.

The link between post-traumatic stress disorder and depression

Post-traumatic stress disorder or PTSD is a mental condition that can be triggered by a traumatic event. It is very closely related to depression such that it is fairly common to find depression in people with PTSD.3 The two also share almost the same symptoms and PTSD is also pharmacologically treated with antidepressants, most commonly with selective serotonin reuptake inhibitors or SSRIs .4

Since physical and mental health both affect each other5, getting out of depression or PTSD with the help of pharmaceutical antidepressants is still a treacherous uphill battle due to their notorious side effects. This is arguably one of the biggest reasons why there are a lot of people who prefer to use alternative or natural remedies to treat not only mental, but also physical conditions.

Cannabis: A “source of happiness”

Society has always associated cannabis and marijuana with healing and “good vibes”. In fact, ancient Hindu religious texts dating back to 2000-1000 BC called it a “source of happiness” and “joy-giver”.6 At present, it is popular knowledge among cannabis users that there are certain strains better suited for combatting depression like Harlequin and Jack Herer and this is because of their unique cannabinoid and terpene profile. It is believed that the “entourage effect” or the synergy among these cannabis compounds helps with depression and at least one study7 seems to support this claim and point to the potential of CBD for depression and PTSD.

Terpenes are aromatic compounds in cannabis resin that give strains their unique smell. While it is true that aromas8 can influence a person’s mood, the cannabis industry seem to strongly suggest that the aromas provided by terpenes play a critical role in the antidepressant properties of cannabis. This is why strains like Cinex and those high in limonene9 are often recommended for depression.

However, other scientific studies seem to point that cannabinoids10 are the ones mainly responsible for this effect, and in particular, THC and CBD. Furthermore, we previously mentioned in The 5 Best Cannabinoid Alternatives to CBD in 2020 that at least one study suggests that Cannabichromene (CBC) might be more effective than CBD for depression and PTSD.

These facts somewhat confirm the belief of many cannabis users that there are more advantages to taking cannabis as it is over just isolated cannabinoids.

Why Use CBD for Depression and PTSD?

However, as discussed in What Drugs Shouldn’t You Take with CBD?, it does inhibit the activity of the liver’s cytochrome P450 enzymes and therefore affects how most prescription medications are metabolized. For example, taking CBD with Warfarin, a popular anticoagulant, can potentially lead to bleeding complications since wafarin will stay in the bloodstream for much longer.

CBD’s effect on the CYP450 system can be a problem for people already on depression medication. This begs the question:

Should you replace your antidepressant with CBD?

Depression is a condition that cannot be treated by medication alone because it is influenced by many factors. There is clearly a bigger downside to taking CBD with antidepressants, so the greater dilemma is determining whether to use CBD or antidepressants.

On one hand, there are a considerable number of people who swear that CBD works better than their depression meds without them building tolerance or suffering any side effects, but there is a gross lack of scientific evidence to bolster these anecdotal claims. On the other, antidepressants are known to have a success rate of around 60%16 according to studies, but some of these studies are funded by drug manufacturers themselves.17 Possibly the biggest black mark against antidepressants is that at the very worst, they can cause side effects just as bad as the effects of depression, like thoughts of self-harm and suicide.18

Given that there are at least 6 different types of depression19 which can go from mild to severe, it is clear that the choice between CBD and antidepressants should be made on a case-by-case basis with the guidance of a medical professional.

It is clear that further studies are needed to explore CBD’s potential as an alternative form of treatment for depression. Consumers already know that it is safe and studies already support the increasing number of anecdotal claims that praise its antidepressant-like and anti-anxiety effects. It should be safe to try and replace one’s prescription antidepressants with CBD just to see if it works better since it is extremely unlikely that a patient will be put in immediate life-threatening danger right after withdrawing from depression medication.