Last week, I had the opportunity to try out Omax Health’s CryoFreeze CBD Pain Relief Roll-On for an annoying workout-related injury I’ve had for months. I saw it on an ad and thought that the idea of a CBD roll-on seemed intriguing so I went ahead and ordered it just out of curiosity.

Omax Health is a dietary supplement company based in Santa Monica, CA. Operating since 2008, the company claims that it has already sold millions of science-backed health products worldwide.

They have a pretty standard product lineup which includes vitamins, probiotics, sleep aids, collagen, curcumin, and a random keto coffee creamer. In addition to the standard CBD oil tincture, they also have a solid lineup of CBD products that seem to be formulated for sports-related muscle and joint pain. Interestingly enough, they also have a libido enhancer for women that claims to enhance sensations but current studies on CBD’s effect on one’s sex drive are conflicting.

Omax Health does use third-party testing for their products. While they provide a certificate of analysis on their website, we found the information on it a bit lacking. It only provides a breakdown of the cannabinoid composition of each product but nothing more. It would be great if they can also have their CBD tested for harmful compounds and pathogens. These have a big impact on the safety of a CBD product.

So why a roll-on? 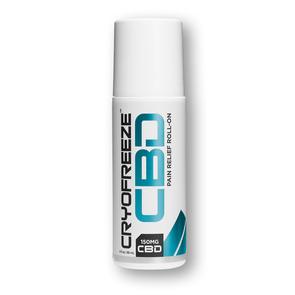 The Omax CryoFreeze CBD Pain Relief Roll-On is basically a combination of broad-spectrum CBD and 8.5% menthol and other ingredients similar to the ones used in most cooling sports gels.

I’ve been wondering about the purpose of putting CBD in a roll-on container. At first, it seemed like a gimmick since roll-ons are typically only for deodorants. But think about this, CBD is fairly expensive so you’d want to get every drop of it where it counts. This makes a roll-on more economical since you no longer have to massage the CBD with your hands. The ball also feels nice as it rolls on your sore muscles.

I bought this with the hope that it will alleviate my shoulder pain caused by clavicle distal osteolysis. In this condition, fractured bones are unable to heal like they’re supposed to. This leaves me an annoying pain after shoulder workouts or push-ups. I used the Cryofreeze roll-on after doing some neck and left shoulder workouts. I did feel that it helped alleviate my pain. However, I’m not sure if it’s because of the menthol, the CBD, or both. I’d probably say that it has a bit more effective than other cooling salves and gels that I’ve used. However, the difference is not leaps and bounds. To be honest, I’m not sure if 150 milligrams of CBD is enough to have any anti-inflammatory effects in my situation especially for a topical.

As mentioned, putting the CBD cooling gel in a roll-on seemed to make sense since it minimizes the waste of CBD and it can double as a sort of massager. I also liked its cooling effect which wasn’t as burning as others that I’ve used. However, I feel it should contain a bit more CBD as it seems a bit expensive compared to similar items of the same content.

I think it was worth trying out the CryoFreeze CBD Pain Relief Roll-On since it’s the first CBD roll-on product that I’ve tried. At least it gives me an idea of what to expect from similar roll-ons. But I think what matters more is the amount of CBD in the formula and the combination of other ingredients aside from the menthol. Also, I think the CBD helps in counteracting the burning sensation commonly caused by menthol cooling gels. Because of this, companies can put in stronger formulas and they won’t burn as much even compared to non-cbd cooling gels.